Expedition Everest — Legend of the Forbidden Mountain is a steel roller coaster built by Vekoma at Disney’s Animal Kingdom theme park. The attraction is themed around the Yeti hiding in Mount Everest. It is listed in the 2011 book of Guinness World Records as the most expensive roller coaster in the world. Including sets and extras, its total cost was reported to be US $100 million, following 6 years of planning and construction. It is the tallest of the artificial mountains at Walt Disney World. Join us today as we take a look at the Making of Disney’s 18th mountain-themed attraction, Expedition Everest …

The attraction first was announced publicly on April 22, 2003, during an event to celebrate the 5th anniversary of Disney’s Animal Kingdom. It took three years and more than 38 miles of rebar, 5,000 tons of structural steel, and 10,000 tons of concrete to build the mountain.
Expedition Everest first opened for previews on January 26, 2006, and had its grand opening on April 7, 2006, in ceremonies led by Disney CEO Bob Iger and, then Chairman of Parks and Resorts, Jay Rasulo.
﻿

The attraction features a stand-by and a single rider line. The queue starts at the office of the fictional “Himalayan Escapes” travel agency, progressing to a replica temple with little holy figures. Visitors next enter a tea garden, followed by a room with equipment from a successful expedition, and then the “Yeti Museum”, which contains information on the Yeti and a molding of a Yeti footprint. There are also about 8,000 artifacts brought from the Nepal trip in the museum. The single rider line skips all of these exhibits.
﻿

The riders board the roller coaster in the model village of Serka Zong, to begin a speedy route through the Himalayas to the base of Mount Everest. The train departs the station to the right and climbs a small lift leading to a short drop, then circles around to a 112ft lift hill carrying guests into the 200ft mountain.

On the way up, guests pass through a ransacked temple with murals of the yeti, warning the riders that the mountain is his territory. At the top of the mountain the train curves around the main peak and goes through a cave. When it emerges, the ride draws to a halt in front of track that has been torn apart, presumably by the yeti. 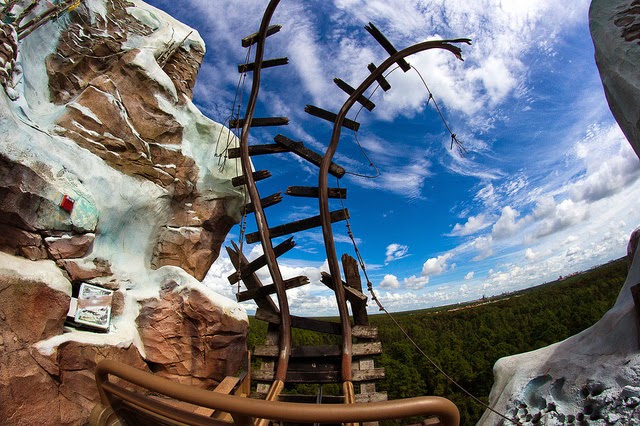 Before the train begins to roll backwards, a series of rubber tires and an automatic switch rotates the piece of track directly behind the train.

The train then rolls backwards along a new route that spirals down through the mountain, coming to a halt in a large cave, where riders see the yeti’s shadow on the wall as he tears up more track.

This effect distracts riders from noticing another automatic track switch being thrown in front of them. As the shadow moves away, the train rolls forward out of the mountain and down the main 80ft drop. It enters a 360° helix and speeds back up through another cave in the mountain, where the roars of the yeti are heard once more. The train exits from the rear of the mountain and enters a large helix before being lifted back into the mountain a final time. The train drops through a cave, where “originally” a large yeti would reach down towards you. 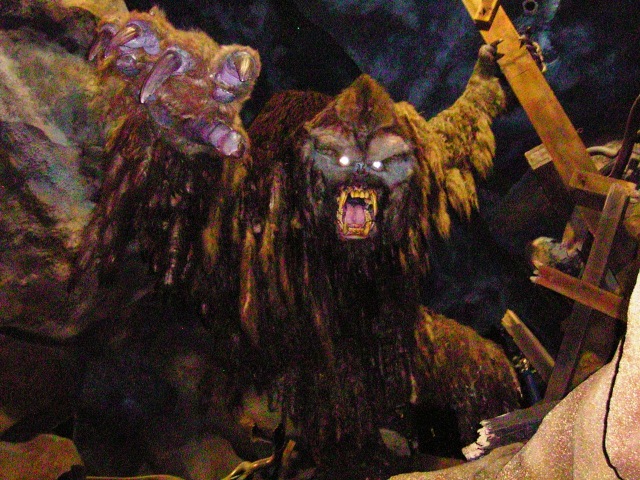 Shortly after opening, the yeti was shut off and a strobe light placed in the scene to give riders the illusion that it was moving. Sources have said that the yeti’s enormous size and weight was actually compromising the foundation of the attraction…more on that later. Upon reaching the bottom of this drop, riders return to the unloading dock and depart into a gift shop. One ride takes about 2 minutes and 50 seconds.

Expedition Everest has six steam-like trains, each with six cars that together provide 17 rows seating two together, for a total of 34 riders per train. The trains are themed as the “Anandapur Rail Service” and are made to look old and rusty. Riders must be at least 44 inches tall and are secured by a lap bar. Up to five trains usually operate at once, but fewer can be used if guest demand is low. To create the illusion of a “steam powered” train, Imagineers placed vents under the station. When a train comes into the station, steam comes up through the vents and enters the loading platform.

The steel track is 4,424 feet long and the lift is approximately 112 feet high. Expedition Everest is the first ride to use Vekoma’s newest track system, in which the rails are on the outside of the ties rather than on the inside. This was the first large-scale installation of such a system.

Although moderate in height and length by contemporary standards, Expedition Everest was the first ride for Disney to have its trains travel both forward and backward. This is accomplished through two sets of track switches, one before the rear segment and one after. This was the second Disney roller coaster to run backwards, the first being Indiana Jones et le Temple du Péril: Backwards! at Disneyland Resort Paris (2000–2004). Expedition Everest, however, was the first Disney roller coaster to switch between forward and backward sections during a single ride. 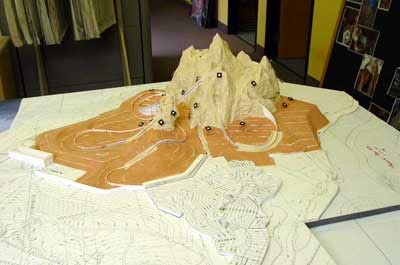 The mountain façade, the Yeti audio-animatronic, and the roller coaster are three independent structures. Each structure reaches the ground-level and does not touch the other two structures. This was achieved via 4-D scheduling software that told builders how to construct the attraction.

Expedition Everest is often compared to the 1959 Matterhorn Bobsleds roller coaster at Disneyland, which also features a snowy mountain setting and an “abominable snowman” figure throughout the ride. Expedition Everest’s mountain is made from 1,800 tons of steel and painted with 2,000 gallons of paint. It is the tallest artificial mountain in Florida, but not, as occasionally cited, the tallest point in Florida. It is Disney’s 18th mountain-themed attraction. As of 2015, there are 21 mountain-themed attractions.

The artificial mountain is a model, not of Mount Everest, but of the fictional “forbidden mountain” guarded by the yeti in the story created by Walt Disney Imagineering for the attraction. Everest is represented by the barren background peak on the far right, which is made to seem far in the distance (an example of forced perspective). 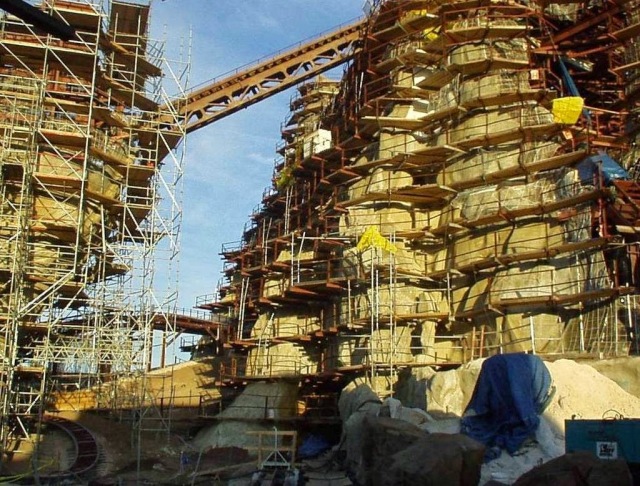 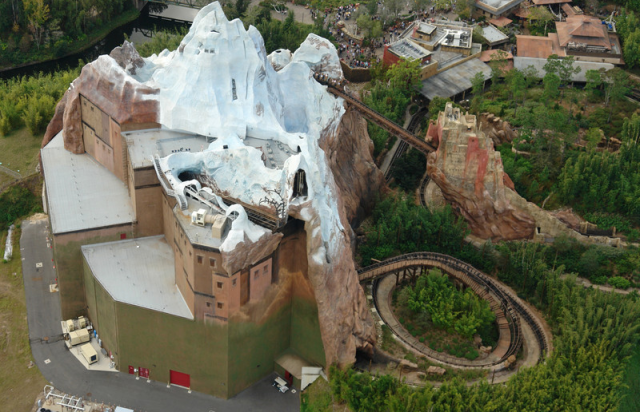 The yeti is the largest and most complex audio-animatronic figure ever built by Walt Disney Imagineering. It is 25 feet tall. Its “skin” measures 1,000 square feet, and is held in place by 1,000 snaps and 250 zippers. Its movement is controlled by 19 actuators. It can move 5 feet horizontally and 18 inches vertically when functioning in properly.

The yeti has not been in full operational mode since a few months after the ride’s opening, when its framing split, causing significant risk of catastrophic malfunction if it were operated. It currently only operates in a alternative mode, which is limited to a strobe-light effect designed to give the appearance of movement, earning it the nickname “Disco Yeti”. 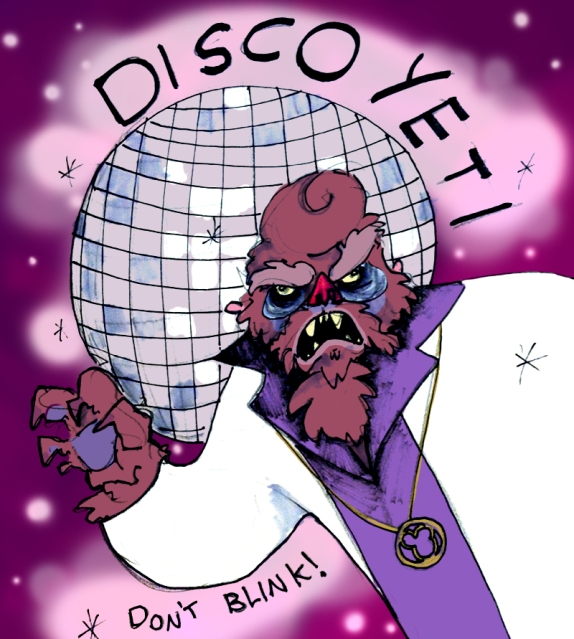 The problem was caused by damage to the yeti’s concrete base structure, which is unlikely to be repaired until a major refurbishment in the distant future, because the design limits access to the yeti without major disassembly of the superstructure. The problem with the concrete is rumored to have occurred due to a glitch in the 4-D scheduling software that prevented adequate curing of a portion of the Yeti’s foundation prior to the overlapping fabrication of mountain elements and roller coaster track.

Joe Rohde, the Imagineer in charge of building the attraction and Animal Kingdom, was asked at the 2013 D23 Expo about the disco yeti. His response was “You have to understand, it’s a giant complicated machine sitting on top of, like, a 46 foot tall tower in the middle of a finished building. So, it’s really hard to fix, but we are working on it. And we continue to work on it. We have tried several “things”, none of them quite get to the key, turning of the 40 foot tower inside of a finished building, but we are working on it….. I will fix the Yeti someday, I swear.”

Expedition Everest won the 2006 Theme Park Insider Award for the “World’s Best New Theme Park Attraction”. It has also been ranked in the Golden Ticket Awards and the Best Roller Coaster Poll. It was ranked 2nd for “Best New Ride For 2006” in the Golden Ticket Awards. It continues to be Animal Kingdom’s top attraction and fits right at home with Disney’s other spectacular, magic mountains.

In 2005, Disney, Discovery Networks and Conservation International conducted expeditions to Nepal as part of the promotion for Expedition Everest. The purpose was to conduct scientific and cultural research in remote areas of the Himalayas, the location of the yeti legend. Participants included Imagineer Joe Rohde and scientists from Conservation International and Disney’s Animal Kingdom. And so, for the grand finale, here now is Building A Thrill Ride: Expedition Everest, that aired on April 10, 2005 and detailed the planning and construction of the attraction, along with some of the ideas that made it possible: 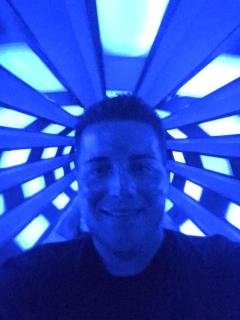 ﻿
Keith Michael Mahne is the owner and editor of Disney Avenue and the host of the Disney Avenue Podcast. He has made countless trips to the Walt Disney World resort since his first trip in 1989 at the age of four.