When considering how a Magic Kingdom creates her environments, there are countless schemas of how the park goes about placing a guest, or a viewer, into a setting that is believable, compelling, and usually otherworldly. No matter the way an attraction positions itself and its thematics, the end result is the same: a believable place or scenario is created, implied, and enjoyed.  This is the crux of a Magic Kingdom: belief is suspended, and we, as willing participants in a fantasy, are taken to a destination usually rooted in the expected cultural conscious. This doesn’t mean the environments are conventional or expected, but they are built upon genres and a cultural wellspring. How else would we willingly accept the sudden changes of time of day, context, or environment, when stepping into a ride vehicle? An experience in the Magic Kingdom is meant to be trasnsportive and preclude some basic logic. Continue after the page break for more…

For the purposes of this article, let’s consider Marc Davis. Davis was the king of caricature characters, and was most well known for his work on the Haunted Mansion and Pirates of the Caribbean.  Davis’ ghosts and buccaneers are instantly relatable; they wear their emotions and personalities very prominently. This isn’t to say that they aren’t realistic, but they are augmented. These characters exist under a guise thematic detail that paints a picture of reality, but are shockingly basic and even fantastic. This isn’t a bad thing, either. We widely accept that Davis created some of the more relatable and memorable characters in WED’s pantheon. However, I think many ignore why Davis’ work operates so well, and that reasoning revolves around one of Davis’ contemporaries’ work on many of the same attractions that Davis worked on.  While Davis often supplied the characters to WED, Claude Coats supplied the setting and the environment. 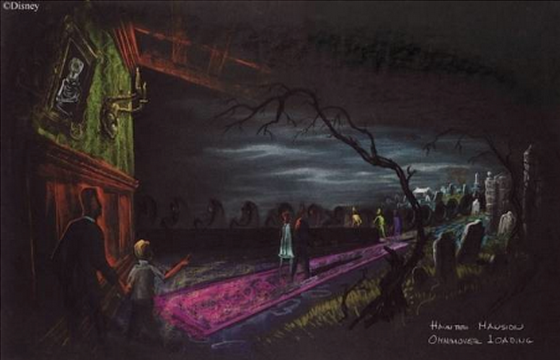 Claude Coats worked on the Haunted Mansion, Pirates of the Caribbean, and countless animated films, providing the setting and “backgrounds” for the narratives or experiences in question. It is Claude Coats’ contribution of setting that establishes the overall tone and mood of the production at hand. And in contrast to Marc Davis, Coats’ work was not augmented or stretched to illicit emotional responses- his work did that by nature of being wrought with texture, peppered with illusion and wrapped up in thematic detail. This is not to say that Claude Coats’ work was not over exaggerated, as some of his more sinister designs are downright warped, but they aren’t augmented to suggest more of a fantasy environment that is already implied. If anything, Davis’ caricatures do this.

So, with all of this this in mind, there is a massive disjunction concerning how a Magic Kingdom goes about placing her stories and experiences in a thematic context. This “Davis Disjunction” allows for the theme park’s setting to be as realistic as details and thematic boundaries allow, while characters and situations provide for the fantasy and “magic” that gives reasoning to the park’s moniker.  Marc Davis’ attractions all contribute to this modus operandi in some way:

The Enchanted Tiki Room, while it boasts a beautiful Polynesian façade, and even houses lifelike birds, also has a host of googly eyed Tiki statues and columns that defy the cultural aesthetic that permeates through the attraction. Of course, a greater sense of fantasy is also found in the fact that the animals and flowers inside the attraction sing and dance. 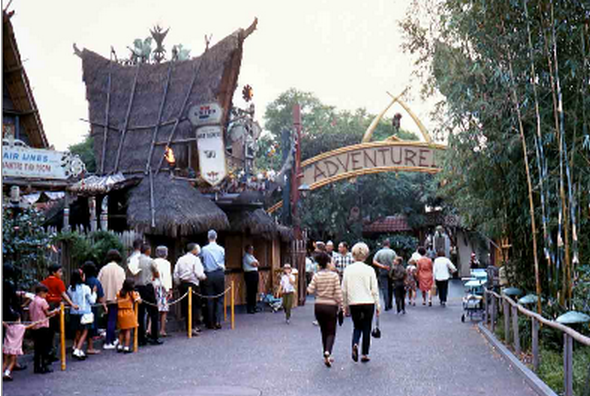 Both the Haunted Mansion and Pirates of the Caribbean draw guests into a vivid and realistic environment, one that could easily be mistaken for something out of real localities or situations we would expect to be confronted with when examining the horror or adventure genre. However, both experiences dwell on the characters we encounter inside. Mansion’s host of ghosts and spooks all have easily discernable features and expressions that, first, allow us, as viewers to discern if they want to harm us or delight us, and two, allow us to relate with them. This is yet another signature achievement of Davis’: His characters and his work place our emotions as tied to that is happening to the characters. Consider the finale to the Haunted Mansion- we are still in a gloomy, oppressive graveyard, gnarled trees and tombstones punctuating our line of sight (thanks to Claude Coats…) but the sheer gleeful atmosphere of Davis’ characters and gags allow for the mood the change away from the mournful setting. The same thing happens in Pirates of the Caribbean: Although we are confronted with the intricacies of curses, time travel, and the eerie charm of a Caribbean island town, most of the buccaneer’s expressions alert us to their intensions. (Not to mention that the pirates never even see us, but that’s a thematic detail for another article. ) The drunken pirate with his group of hogs never threatens us, nor presents us with a reason to doubt that he’ll ever leave the mud. The auctioneer, though menacing, is clearly a vindictive pirate, but removed from us.  These characters fit the ride and it’s Caribbean aesthetic, but their overly dramatized moods wouldn’t be a reflection of realism in the same way an audio animatronic from, say, Spaceship Earth would. (Granted, there ARE pirate molds used to populate Spaceship Earth, but their coloration is so augmented between the two attractions that the difference in mood and expression is literally world’s apart. )

And then there is Davis’ Country Bear Jamboree. Set aside in a rustic and authentic theater amongst the clapboard buildings of Frontierland, Grizzly Hall could easily be a venue for human beings to preform, yet there are large bears on stage, singing and dancing along to music. And this goes off without a hitch. We are in the American West, by all accounts. The Liberty Belle and the Rivers of America are within eyesight, both realistic and truthful to their setting in every way. Big Thunder Mountain also can be seen through the trees, and though wild and unpredictable, it has the trappings of realism about its setting and aesthetics. Yet, take a left turn into Grizzly Hall and there’s a touch of fantasy and music waiting behind those red velvet curtains. This is the true nature of the Davis Disjunction and what it is to be a participant in the Magic Kingdom: conventions are suspended and illusions and thematic boundaries are meddled with when characters and attractions are made to fit on a sliding scale of how the realism of an environment and fantasy converge. 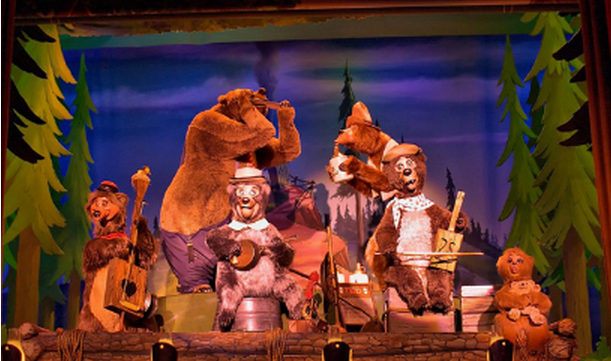 All of this considered, it should come as no surprise that this style of Davis’ is a mainstay of how a Magic Kingdom works. Tony Baxter adapted it for many of his attractions, including the aforementioned Big Thunder Mountain Railroad, and even something like Splash Mountain that plays fast and loose with realism and fantasy characters, especially when not placed in Critter Country, but in Florida’s Frontierland. One of the latest attractions out of Walt Disney Imagineering is no different. Mystic Manor in Hong Kong Disneyland has the same thematic disjunction described here and is replicated, adhered to, and perhaps even done as a tribute to Marc Davis and his brand of attractions. 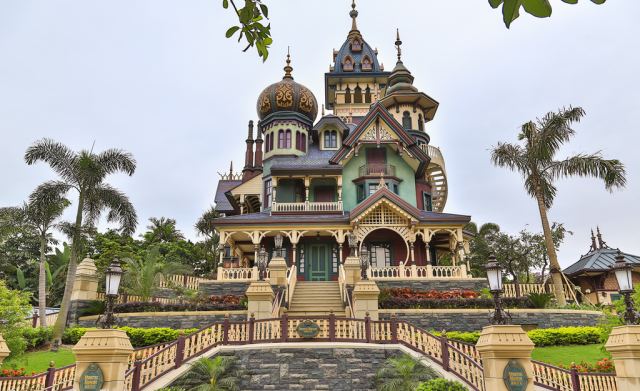 Mystic Manor takes place within Mystic Point, a thematic extension of the Adventureland concept, but centered around one large attraction. The grounds for the manor house are populated with artifacts and venues that are rich in the amalgamation of cultures and aesthetics of antiquity, ripe for use in an eccentric museum’s setting, which is what the manor house is. All of Mystic Point’s structures are realistic and beautifully detailed, firmly establishing the cogent thematics of this jungle outpost serving as a professor’s residence and museum. Inside the manor, the experience is one of sight gags, fantasy, and the antics of Albert the Monkey, Lord Henry Mystic’s pet. Lord Henry Mystic is the curator of the museum and the manor house’s occupant, while Albert is the foil who opens a magic music box and sets an enchantment upon the artifacts in the museum that brings them to life.  Here again, is the Davis Disjunction at work. Both characters and many of the scenes seen on the ride are highly stylized and made to look and appear as part of the fantastical series of events we see taking place. Lord Henry is the stereotypical English adventurer/historian/professor, in both appearance and action. Albert, his adorable pet who sets the entire attraction into motion is also highly emotive, spelling out how we see or feel based on what is happening around us in Mystic Manor. These overextensions of character make the ride no less fantastic or no less artistic, much in the same way Marc Davis’ caricatures allow the thematic breadth of a ride to be realized. Mystic Manor and Albert and Henry are simply a tribute or an extension of the style of one of WED’s greatest Imagineers. 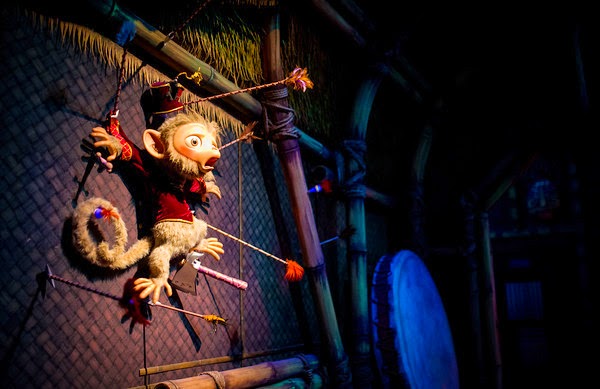 The disjunction between a realistic environment and relatable, emotive characters is a hallmark of Imagineering and the way we see our way through a Magic Kingdom. What is most astounding about this thematic method is how it has stood the test of time. Marc Davis and Claude Coats began their work in Disneyland in the 1950’s, many of their more famous attractions being created in the 1960’s and 70’s when Disneyland was rapidly expanding and Walt Disney World was first being conceptualized. And now, here we are in 2015, seeing the same sort of thematic sensibilities recreated for a totally new, original, and technologically advanced dark ride like Mystic Manor. All the more proof that although Imagineering grows and adapts, the strongest thematic traditions of the Magic Kingdom will continue to flourish. 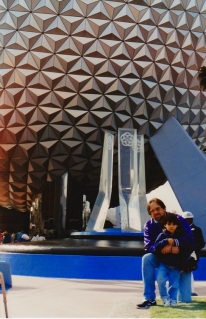 EPCOT Explorer has been visiting the Walt Disney World Resort since he was 2 years old and has recently just made his first visit to Disneyland. EPCOT Explorer’s first ‘Disney’ interest is the history of EPCOT Center of his youth and the brand of optimism, futurism, and culture that was originally found in the park. Other interests include the thematic interplay of design elements in Disneyland and the Magic Kingdoms that make these theme parks repositories of culture and Americana. EPCOT Explorer is also interested in the World’s Fairs for their connections to EPCOT and tiki culture, since the return of the Enchanted Tiki Room to Walt Disney World in 2011. EE’s writings often focus on the minutia of Disney’s enterprises and attempt to uncover how and why the parks function in the manner that they do. EPCOT Explorer is currently a graduate student and Teaching Assistant in History at Florida International University. EPCOTEXPLORER.TUMBLR.COM

You can find all of EPCOT Explorer’s articles here.﻿